Steve Gorn has performed Indian Classical Music and new American Music on the bansuri bamboo flute in concerts and festivals throughout the world. His gurus are the late bansuri master, Sri Gour Goswami, of Kolkata, and Pandit Raghunath Seth of Mumbai, who he has often accompanies in concert. He has also studied with the late Ustad Z. M. Dagar.

During the past decade Steve has often performed in India, appearing at Bharat Bhavan in Bhopal, Triveni Hall in New Delhi, The Sangeet Research Academy in Kolkata, NCPA, and The Nehru Center in Mumbai, and numerous other venues. His performance with Pandit Ravi Shankar’s disciple, Barun Kumar Pal, at Kolkata’s Rama Krishna Mission, was televised throughout India. In the New York area he often performs with Pandit Samir Chatterjee as well as the Darbari Ensemble with sitarist, Allyn Miner and the sarangi master, Ramesh Misra.

Sri Gour Goswami introduced Steve to the vocal (gayaki) style of bansuri that was first introduced by the legendary flutist, Padmabhusan Pannalal Ghosh. As a disciple of this illustrious gharana, the heart of Steve’s playing reflects an attention to meer and gamak and an ‘old world’ rendering of raga which unfolds timelessly and with attention to the rasa, or color of each note and melodic contour.

Since 1996, Steve has continued his study under the illustrious bansuri master, Pandit Raghunath Seth, of Mumbai. Raghunathji’s compositions in numerous ragas, and his performance style are now a prominent feature of Steve’s performances. 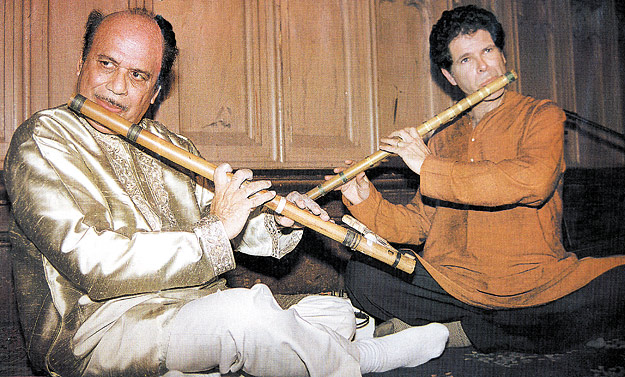 Raga means ‘to color the mind.’ Steve’s concerts offer a unique performance revealing the beauty and subtleties of raga. This exquisite music, evolved from the rich spiritual and yogic traditions of India, and unfolds in an unending dance of melody and rhythm.  Steve often includes a ‘guided listening meditation,’ which reveals the inner form and architecture of the music.